Mearns Castle High School are runners up in the 2019 ‘Change Starts With Us’ Award!

Mearns Castle High School in East Renfrewshire has come 2nd place in respectme’s 2019 ‘Change Starts With Us’ Award. Competition was extremely close, and we think the work of the pupils was so impressive that we wanted to share some of things they have been up to… 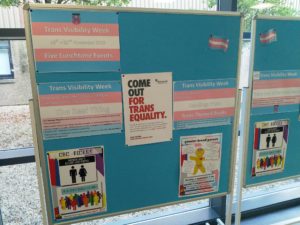 In September, pupils in the GSA (Gender Sexuality & Allies) group presented a school exhibition of ‘Bi-cons’ – providing information on and quotes from artists, musicians, politicians and singers. The Bi-flag was raised and posters provided information about what being Bisexual means to the Bisexual community.

In October, the GSA group hosted a networking event for four other local GSA groups to meet and discuss ways to find their voice and identity. Activities encouraged pupils to learn from each other and to better understand what they need from allies. Over 100 young people and around 20 staff attended.

During Anti-Bullying Week 2019, pupils delivered a ‘Change Starts With Us’ presentation to all year groups. They also researched, created and displayed a series of posters providing information on anti-bullying themed campaigns, including: Show Racism the Red Card, Stonewall, LGBT Youth Scotland, T.I.E. Campaign, the British Council for Muslims, and the Jewish Council.

For Trans Visibility Week, pupils helped develop five lessons – one for each day – titled: ‘Visibility and Validation’, ‘Identity and Expression’, ‘How to be a good trans ally’, ‘If I had a voice’, and ‘Trans Role Models’. Alongside this, pupils helped deliver five lunchtime events: A short film screening of a The Real Thing with a Q&A from senior pupils; readings from trans themed books in the school library; a Trans Memorial Day service; and short film and spoken word events using resources from My Genderation and Mermaids UK. Trans Ally pin badges were distributed at the above events and the Trans flag was raised permanently at the school.

Senior pupils of the GSA group discussed how to recognise local, national and international spokes people and allies of the LGBTQ+ community. They designed an MCHS LGBTQ+ Champions Award Programme through which they send letters and pin badges to a nominated individual each month. Individuals nominated so far include: Lord Michael Cashman, (EastEnders actor and founder of Stonewall UK), Paul Johnson (Senior Lecturer at the University of York Dept. of Sociology), and C-J Quigley and Owen Brand (LGBT Youth Reps at the Scottish Youth Parliament).

In January, the GSA group explored pictorial evidence from the Liberation of Auschwitz-Birkenau and learned about the Wilhem Bresse photographs which act as a stark reminder of the hatred shown towards many during that time, including Jews, Romany, Disabled, Communists and LGBTQ+ Community.

In February, the GSA group worked with LGBTHistoryMonth.org.uk to identify LGBTQ+ icons from the literary world. Information on each of the icons was exhibited in the school foyer and because some were also part of BAME communities, the school purchased and raised the Philadelphia Pride flag for permanent display. All year groups also took part in a ‘hands up’ style survey to explore subjects including gendered role models and personal links to the LGBTQ+ community.

On one in-service day, pupils delivered their own workshops for staff alongside a presentation by members of the TIE campaign. The workshops focused on: terminology used in connection with the LGBTQ+ community, LGBTQ+ history in Scotland, and LGBT+ Inclusive Education.

Pupils at Mearns Castle High School hope to build on their work around trans allyship, to continue their interschool network, and to develop a school pride flag. The GSA group has identified ‘intersectionality’ as the theme for next year’s work.

Has Mearns Castle High School inspired you to share your #ChangeStartsWithUs journey so far? Contact saoirse.docherty@respectme.org.uk to tell us about it!