The Montrose Academy anti-bullying group is made up of five pupils in S2 – S3. Together, they lead the anti-bullying activity in their school. 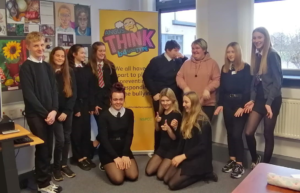 Montrose Academy pupils with the rest of the Angus ‘Think Before You Type’ Youth Advisory Group.

Over the last year, two members of the group, Sophie Beedie and Charlie Rutter, also represented Montrose Academy in ‘Angus Think Before You Type’, a campaign developed by young people across Angus in partnership with respectme, Angus Council and NSPCC Scotland to further understanding of online bullying and find local, youth-led solutions to address it.

‘When we read the compliments, pupils were quite shocked because they weren’t used to hearing positive things about themselves. It was really nice.’ – ABG Member

Boxes were placed in PSE classrooms for pupils to anonymously raise concerns with staff. Replies were to each concern were posted on an anonymous but publically accessible advice board.

‘After an assembly one boy told me he had stood up to his friends when they mimicked another boy’s speech. He told me he had done it because it was one of the small changes listed on my slides at the assembly.’ – Karen Taylor, DHT, Montrose Academy

The anti-bullying group held pupil focus groups in which they discussed anti-bullying initiatives and solutions that could be introduced at the school, and provided feedback to existing anti-bullying activity.

Beginning on Anti-Bullying Week 2019 and continuing for the next four weeks, staff focused on meeting and greeting pupils at doors and in corridors. This aimed to highlight that staff are available to speak to about concerns pupils may have.

‘How I feel…’ Post-it Note Display

At the start of Anti-Bullying Week, check-in teachers encouraged classes to write their feelings on post-it notes, which were then displayed on an ‘Emotions wall’. This allowed pupils to witness the range of emotions their peers in the class were feeling.

The anti-bullying group are now working with teachers to organise an assembly presentation from a community police officer to raise awareness of the laws around bullying behaviour.

Has Montrose Academy inspired you to share your #ChangeStartsWithUs journey so far? Contact saoirse.docherty@respectme.org.uk to tell us all about it!