Carnoustie High School pledges to support those affected by bullying 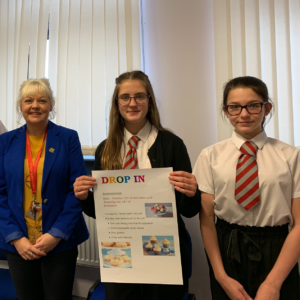 Members of the Carnoustie High School anti-bullying group with their teacher.

During this year’s Anti-Bullying Week, we travelled to Carnoustie High School in Angus where we met pupils leading the way towards a safer environment for their peers.

Five dedicated students in S2 and S3 make-up Carnoustie High School’s anti-bullying group: Mason, Alanna, Amy, Adam and Kerr. Together with their teacher Miss Meldrum, the group leads the school’s involvement in Angus ‘Think Before You Type’ – a campaign developed by young people across Angus to address online bullying delivered in partnership by respectme, Angus Council and NSPCC Scotland. These young people have been the driving force behind the school’s jam-packed Anti-Bullying Week and plans for the rest of the year. We spoke to the pupils about their anti-bullying ambitions…

The group held a series of pupil assemblies in which they introduced themselves, explained the aims and theme of Anti-Bullying Week 2019, and highlighted the anti-bullying work happening across the school. Pupils watched a clip from the recent BBC documentary ‘Odd One Out’, in which Little Mix member Jesy Nelson talks about the effect online bullying has had on her life. Assemblies ended with practical advice for pupils affected by bullying.

‘We thought the Jesy Nelson clip needed to go into the assembly as we felt that lots of people would know who she was and it gives the message that online bullying can happen to anyone, even celebrities.’ – Kerr and Mason (S3)

The group also hosted a staff meeting in which they emphasised the important role staff have in initiating conversations and supporting pupils who are affected by bullying. At the end of the meeting, the group asked staff to sign a pledge stating they are available for students to speak to them about bullying issues.

‘The assembly was very powerful, especially as it was delivered by the pupils and this gave it more impact.  I also felt the use of the Jesy Nelson clip gave a very stark view of the impact of online bullying that we know some of our young people are experiencing.’ – Miss Meldrum, Principal Teacher Pupil Care & Support

The aims of the staff pledge are to improve pupil’s confidence in approaching staff and to ensure pupils know that staff are willing to help. An impressive 61 of the school’s 76 teaching staff signed the pledge on the day, with further opportunities for support staff to sign it provided in early 2020. The pledge will be displayed publicly at the school.

‘The reason we made the pledge was to show pupils that there are lots of staff in the school who are willing to listen and who they can talk to.’ – Amy and Alanna (S3)

Lunchtime drop-in sessions provided S1, S2 and S3 pupils with opportunities to meet, socialise and play games. The drop-ins aim to provide a safe space for young people to come together, especially those who might be feeling left out. The S1-S2 drop-in was attended by 30-40 pupils while the S3 drop-in was attended by 20-25 pupils.

‘We did this to give pupils a safe place that was quieter than our very busy social area at lunchtime. We weren’t sure if anyone would turn up but we couldn’t believe how many people came along. It felt good to see them chatting with other pupils at the drop-in and they looked happy.’ – ABG Member

‘I hadn’t ever really thought about people spending break and lunch on their own as I have my group and we just eat lunch then play football – it was nice to be able to help pupils who were alone and help them to have a good lunchtime.’ – ABG Member

A new box has been stationed in the library allowing students to raise anonymous concerns about bullying. Support staff will answer these concerns via an anonymous advice board displayed in the school.

‘This will allow pupils a discreet and anonymous way to ask questions and raise concerns they have regarding bullying issues for themselves or their peers.’ – Miss Meldrum, Principal Teacher Pupil Care & Support

Finally, the anti-bullying group led a series of PSE lessons for their peers in which they used exercises from our ‘Change Starts With Us’ campaign to create lessons on the effects of bullying. One S2 PSE pupil said:

‘It was good to be able to discuss this in class and see that other people have been through bullying too, this helped.’

These initiatives will continue to run throughout the year and the group will be monitoring the impact they are having. Carnoustie High School will now turn their attention to updating the school’s anti-bullying policy. They also have plans to create a dedicated anti-bullying email address which will allow pupils to contact support staff directly, and the group hope that the lunchtime drop-in sessions can become weekly events. When asked how they see these activities impacting the school, one ABG member said:

‘I hope this will make some pupils more comfortable and happy when they come to school. I also hope the staff pledge will let pupils know there are many adults they can talk to in the school.’

Has Carnoustie High School inspired you to share your #ChangeStartsWithUs journey so far? Contact saoirse.docherty@respectme.org.uk to tell us all about it!